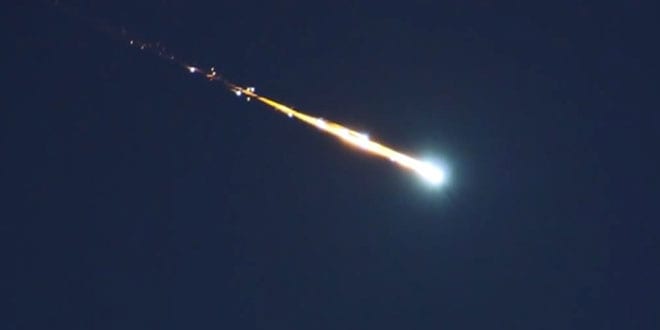 Police in Cyprus suspect that a meteorite gave residents cross the island a rude awakening in the early hours of Friday morning with efforts are currently underway to locate the possible remains of the space rock.

Speaking to the Cyprus Weekly, an official from the Cyprus Police Press Office said it was more than likely that the hundreds of callers had experienced a cosmic phenomenon. The incident occurred between 12am and 1am on Friday morning.

“Without confirming anything, we strongly believe that it was a meteorite,” said the police official.

“We have had a lot of witnesses call in reports of what they described as an object with a blue glow streaking across the sky in the areas of Troodos, some Limassol communities, Agros, Palechori and Macheras.”

“We then received reports that a loud explosion was heard followed by what was described as the ground shaking. Some even claimed to see this object hit the ground. Those reports came from areas like Klirou [in Nicosia] all the way to Episkopi.”

Astrologist Demetris Panagiotides later confirmed that a some space rock may have fallen on Troodos but locating it will be a tall order because it would be small in size.

But speaking to the Cyprus Weekly, Cyprus Geological Department official Iordanis Demetriades said that seismic instruments did not record any kind of movement.

“Our seismic instruments would have recorded anything shaking on the ground or in the sea. It is more than likely that this object most probably exploded in the sky which is what may have caused the tremor felt by the public.”

A search is currently underway to try and locate any possible remains of the suspected meteorite by the Cyprus Civil Defence. Civil Aviation officials claim that nothing had been identified or reported by any pilots and that flights had been operating normally over the island’s air space all night and all morning.

Back in 2013, a meteor crashed in Russia’s Ural mountains injuring just under a 1,000 people as the shockwave blew out windows and rocked buildings.

Most of those hurt, in the Chelyabinsk region where meteorites fell, suffered cuts and bruises.