Submerged Paphos wines brought up, and have ‘aged well’ 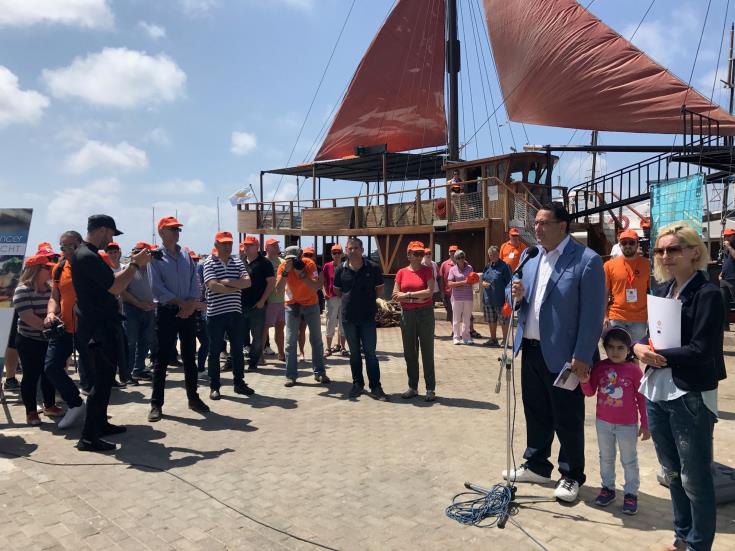 Wines that had been submerged off the coast of Yeroskipou since November 15 were declared fit for human consumption by experts on Sunday in Paphos, and declared to have aged well, according to CNA reports.

Some 280 bottles of Cyprus wine that were submerged as part of the Pafos2017 celebrations. The same number and types were stored in optimum winery conditions at the same time for comparison and all were cracked open on Sunday at a public event.

Around 100 members of the public were given the opportunity to board the Jolly Roger II and participate in the trip to Yeroskipou to retrieve the wines and witness the entire wine lifting process first hand. The boat then sailed back to Paphos harbour.

The project is part of the culture capitals gastronomy programme the “Art of wine – The garden of tastes”,

Twenty five Cyprus wineries were involved and provided wine for the project, including: KEO, Vassilikon, Zambartas, Tsaggarides, Kolios, Ezousa, Kamantarena and Shoufas. The Sommeliers Association and the Dive Centre Association were also involved.

Speaking at the event at Paphos harbour on Sunday the president of the Pafos2017 board Christos Patsalidis said gastronomy was an important part of the cultural programme. He also said he was glad to see both locals and visitors have the opportunity experience the local wines.

The bottles were brought up by Dive Centre members in cooperation with the Port Police, the Ports Authority and the Municipality of Yeroskipou. The wines had been examined at regular intervals since their submersion at a depth of 27 metres for 18 months. They were lifted with the help of air bags and placed in plastic boxes for transporting back to Paphos.

Sommeliers George Kassianos and Vassos Manoli were first to taste the wines and declared that they had aged well underwater.