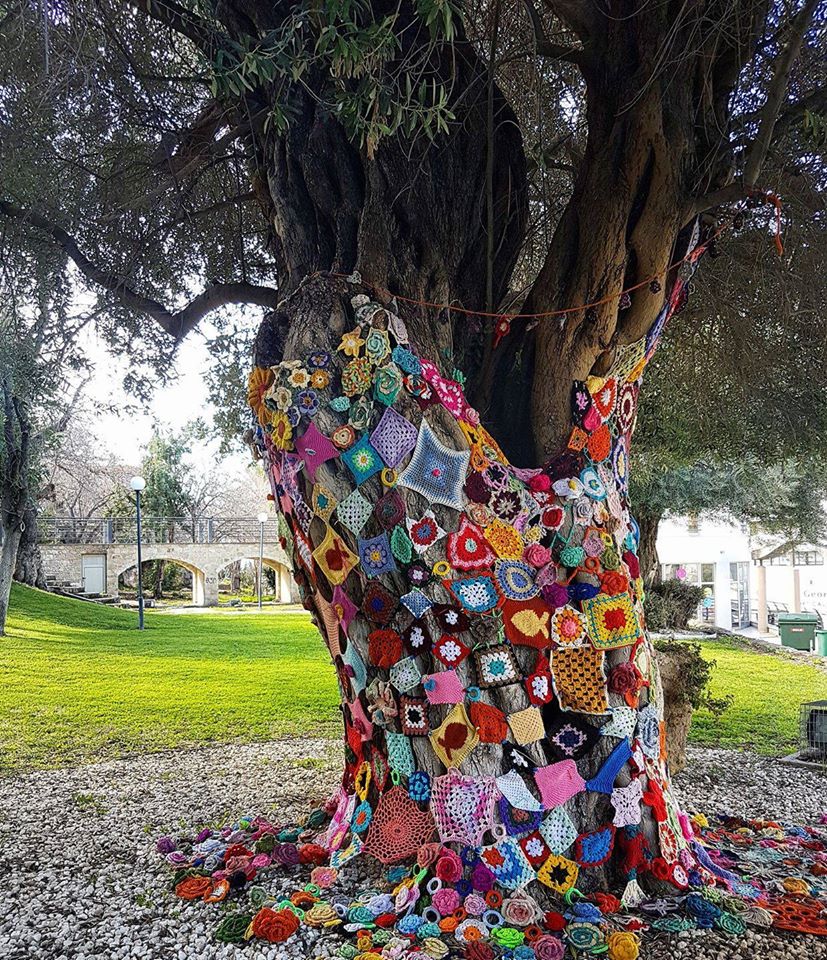 AN open call is inviting women to become involved in a Peace2Peace crochet project which will see them decorate stones to be placed in a new public garden in Moutallos in Paphos.

For their first project in August 2016, they decorated an anchor at Paphos harbour, then a landmark tree outside the municipal gallery in Paphos, followed by a bench at Buyuk Han in the north to promote peace and friendship.

The latest project, which is in cooperation with Pafos2017, the European capital of culture, is within the framework of the community involvement programme.

Mouzouri said that sea pebbles, hopefully around 200, will be dressed with crochet and placed at the new botanical garden, when it’s completed.

“We are supplying the yarn to the women ourselves. It’s a first call and we will give a short lesson on how to crochet the piece and hand out the yarn. We also gave yarn to Nilgun and she’s going to start handing it out in the north,” she added.

The pebbles will be installed in the new botanical garden which is currently being constructed in Moutallos, found close to the mosque, in May. The garden is part of a larger upgrading project underway in the area at the moment, she said.

Peace2Peace next two projects are in cooperation with Pafos2017 and both will take place in Moutallos, which Mouzouri says holds a special history and meaning.

Ahead of the sea pebbles project, another project will take place on Sunday April 23, and will be an installation at the mosque.

“We will install crochet pieces which we have almost completed on the fencing; they are granny squares and polygons in muted colours, such as greens and purples, but with a splash of colour.”

Each time a pattern was handed out, the same pattern was given to a Greek Cypriot woman and Turkish Cypriot woman, she added. The initiative aims to involve women from all over Cyprus in these events, enabling them to exchange ideas, eliminate any prejudices and get to know each other, Mouzouri said.

She said that the mosque is particularly significant in the community and is called Saint Sophia mosque, after an orthodox saint, unusual for a mosque, she pointed out.

“From the name you can understand how important it is. It’s a church that became a mosque and everyone accepted that. It’s very significant, like a double identity. Moutallos is generally a special place as people were displaced from there and refugees from the North settled there. It’s symbolic for both communities.”

Mouzouri said that the mosque is only open some certain times during the year for Turkish Cypriots to visit and that the women are hoping to obtain a license to open it for a tour for their Turkish Cypriot counterparts who will travel from the north in a free bus for the event.

“If all goes well, when the installation is completed, they will have a tour of the mosque, of Moutallos itself and the centre of Paphos as well.”