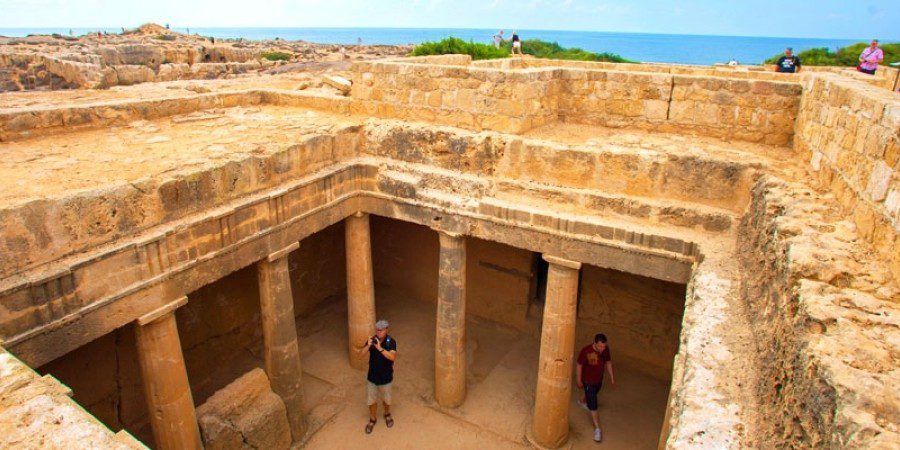 Archaeologists have announced that they have made a very important discovery after initial estimates link a tomb unearthed at the Tombs of the Kings area in Paphos, with that of a 12-year-old Ptolemy prince, who died in Cyprus in 150BC, and who was the dynasty’s co-regent at the time.

According to the experts, the tomb is believed to belong to the Ptolemy Eupator, the son of Ptolemy VI Philometor and Cleopatra II, who reigned for a short period as co-ruler with his father. He died not long after he had assumed the title, around 152BC.

The Ptolemaic dynasty – the successors of Alexander the Great – ruled Egypt and an area stretching from southern Syria to Nubia, including Cyprus. The kingdom’s capital was Alexandria, in Egypt. The dynasty ruled between 323 BC when Alexander died until the Roman Conquest in 30BC.

Associate professor of ancient history at the University of Cyprus, Theodoros Mavroyiannis, said that, historically, it is certain that Ptolemy Eupator had died at the age of 12 in Cyprus in 150BC and that he was co-regent with his father, evident in the two eagles found sculpted on his tomb.

The two eagles are also depicted at the back of Ptolemaic coins, he said, when the person depicted was a co-regent.

Mavroyiannis expressed his conviction that Ptolemy Eupator was a co-regent with his father between 152 and 150BC, and that Cyprus was under his jurisdiction.

According to inscriptions and various historic information, he said, Eupator was also mentioned as a god.

“But to reach the conclusion that this was the tomb of a deified king, an architect had to examine the monument,” Mavroyiannis said.

Architect at the department of restoration of ancient monuments of the Greek ministry of culture, Michalis Lefatzis, who visited Cyprus to examine the tomb said it “presents a peculiarity”.

Every other second century BC tomb in Alexandria and in the Tombs of the Kings area in Paphos are dug out and have an atrium made with Doric columns, he said. In the place of the atrium, the monument in question has a rectangular rock, on which a large structure used to rest.

“The monument in question, compared to the rest of the Paphos Acropolis and of those in Alexandria that bear similarities, has rather the type of a royal tomb,” Lefatzis said.

This is also the first tomb of a higher ranking official of the Ptolemaic period identified in Cyprus, he said.

The tomb, he said, rests on a podium, which means that it belongs to a person who has been deified, “meaning that it must belong to a king”. He added that the engravings and other architectural findings located next to the tomb, also led to this conclusion.

The findings, he said, indicate that the tomb had a prominent position and that it was visible from a great distance.

Lefatzis said that this was just an initial conclusion, but to be absolutely certain, “a documentation of the material and a very well planned study for the monument must be carried out”.

This tomb, he said, could be one of the most important findings of the region.