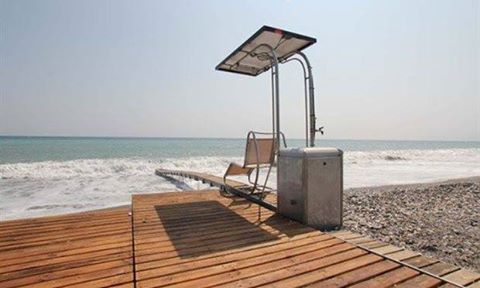 For the first time since 2012 a device which enables people with mobility problems to access the sea has not been installed in Paphos, causing problems for the disabled, head of the paraplegic association Demetris Lambrianides said on Monday.

The €30,000 self-contained Seatrac system allows the disabled to be rolled or walk down a ramp at the beach. They then transfer to the Seatrac seat and with the push of a button they slowly move on a tracking device into the sea and out.

During winter, the system is removed because it cannot operate in bad weather.

Paphos was one of the four cities in Cyprus which in 2012 joined a project to create accessible beaches and one of the systems was used at the Sodap beach every year until now.

“Unfortunately this year the municipality of Paphos has not installed the Seatrac system at the Sodap beach,” Lambrianides said.

“Not only did they not install it, but they did not even respond to our letters and our request that if they were not going to use it, to give it to us to use in another municipality since it is a sought-after system that substantially upgrades the infrastructure for people with severe motor disabilities.”

The first letter was sent on October 24, 2016 and a second one on June 26, 2017. These were followed by telephone reminders, a conversation with the municipal secretary who did not reply to the request, and another phone call.

“We learnt verbally that they decided not to install it. July is over and the system is idle,” Lambrianides added.