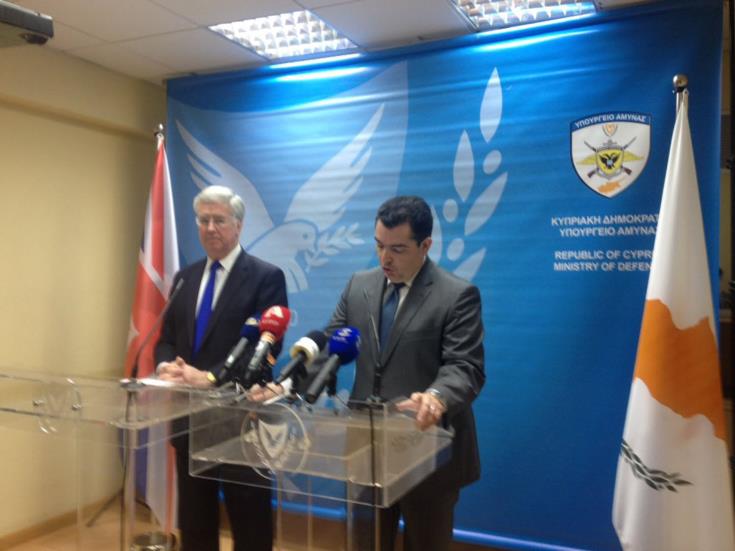 London will do what ever is necessary to help secure a settlement to the Cyprus problem that would allow each community to feel secure about its future, Michael Fallon, the UK Defence Secretary said on Friday, noting that the UK is ready to consider any future security arrangement the two sides will agree on.

His remarks came after a meeting with his Cypriot counterpart Christoforos Fokaides who said that Turkey should realise that anachronistic security systems of the 60s have no place in the 21st century especially for EU member-states.

“Let me emphasize as a guarantor power the UK will do what ever is necessary to help secure a settlement and to find an agreement that would allow each community to feel secure about its future. We support that process and we are ready to consider any future security arrangements that the two sides in the negotiations can agree on,” Fallon said in a joint press conference with Fokaides.

He also reiterated London`s offer to to hand over nearly half the territory of the Base Areas to a reunified Cyprus, expressing hope that this offer will make an important contribution to the eventual deal.

“But it will not adversely affect the ability of our basis to promote security in the region, dealing with extremist terror mass migration or any other threats,” he added.

On his part Fokaides said he briefed Fallon on the latest developments in the peace process under way, assuring that “our side`s will and desired for a viable and functional settlement is granted.”

“What is not granted and remains however remains to be seen, is for Turkey to realise that in the 21st century especially on the issue of security and guarantees anachronistic systems of the sixties have no place especially for an EU member-state,” he added.

Furthermore the two Ministers said Cyprus and the UK will step up there defence cooperation programme signed last year in London.

We ascertained not only the excellent results but also the new opportunities to strengthen this cooperation.

“For this reason we have signed earlier a renewed and more auspicious defence cooperation programme,” he said, adding that a Cypriot military attache will be stationed in London for the rist time.

“We believe our cooperation, despite the British people`s decision to exit the EU, will be further strengthened in the coming years,” he added.
Fallon said on his part “today we have agreed to step up that Defence Cooperation Programme and to tighten the ties between us.”

He added that building on the agreement signed last year we have agreed to even closer cooperation in areas including maritime security counter-terrorism and air defence “and we look forward to developing further Cyprus` leadership in crisis response.”

He also thanked Cyprus` “pivotal role” in providing support to British aircraft fighting the Islamic State and Cyprus humanitarian aid to persons displaced due to terrorism.

“As we confront those challenges here in the eastern Mediterranean, of improving security of combating terrorism of defending democratic values we could have no better partner than our great friend, Cyprus,” the British Defence Secretary concluded.