President: Proposals which are in line with the Conference on Cyprus statement must now be examined 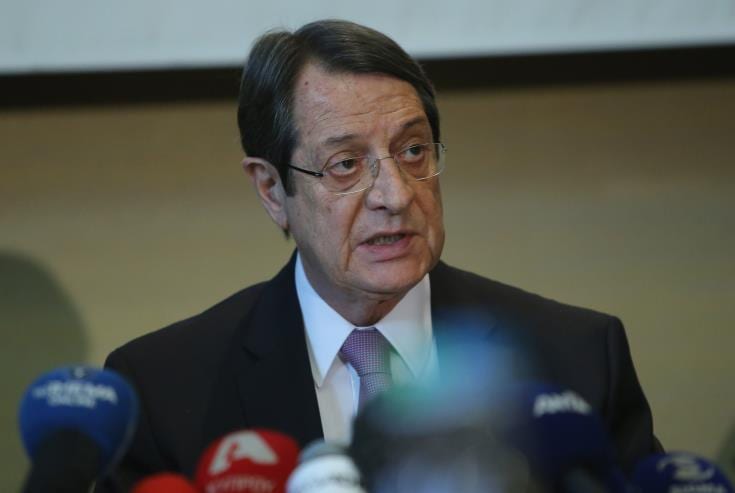 Cyprus President Nicos Anastasiades has said that after the completion of the deputies’ meetings in Mont Pelerin on the issue of security and guarantees,  the political leaderships of the parties participating in the Conference on Cyprus must look into those proposals which are in line with the statement of the Conference that was issued in Geneva on January 12 and determines “the framework for any political decisions.”

Asked if the preconditions for the continuation of the Conference on Cyprus at the political level have been met after the conclusion of the deputies` session, the President said that this will be examined on the basis of the deputies` discussions result.

He added that “all possibilities will be examined with the UN as well, but also particularly” during a meeting he will have on January 26 with Turkish Cypriot leader Mustafa Akinci and “during contacts that need to take place with the guarantor powers”. He also reiterated that the Cyprus government has been in full coordination with Greece.

“We will evaluate things together and we will take our decisions, following tomorrow`s briefing by our representative (at the deputies` session) and negotiator Ambassador Mavroyiannis with a view to look into the final results and the existing prospects,” he added.

The working group of deputies established by the Conference on Cyprus met in Mont-Pelerin on January 18-19. UN Secretary General`s Special Adviser on Cyprus Espen Barth Eide said in a statement that the working group “successfully completed the mandate entrusted to it by the Conference, namely identifying specific questions related to the issue of security and guarantees and the instruments needed to address them.”

Addressing a reception at MegaOne TV station, President Anastasiades also noted on Friday that “it is through our tactics” that the real will of those occupying Cyprus for 43 years will be revealed.

“It is through the tactics we`ve been following that we will find out if Turkey really wants a settlement” and if conditions  allowing “us to reunify and liberate our country exist,” he added

Anastasiades stressed the need to maintain steadfast positions, goals and principles, adding that in this way “we will on one hand respond to the people`s demand to feel free, to feel that they really live in a European country, and on the other hand we will prove wrong all those who may want to give credit to any plans Ankara may have.”

Addressing the same event, Archbishop Crysostomos II wished that a functional settlement of the Cyprus problem will be achieved.

The Conference on Cyprus convened in Geneva, on January 12, under the auspices of the UN Secretary-General Antonio Guterres, with the participation of Anastasiades and Akinci, the Foreign Ministers of Greece, Turkey and the United Kingdom as guarantor powers and in the presence of the European Union as an observer, to address the issue of security and guarantees, a crucial chapter in discussions for a Cyprus settlement.

It decided to establish a working group at the level of deputies to identify specific questions and the instruments needed to address them, and that the Conference will continue at political level immediately thereafter to review the outcome of the working group’s discussions.

In parallel, according to the decision taken by the Conference, the negotiations on outstanding issues in the other chapters will continue between the two sides in Cyprus.

Cyprus has been divided since 1974 when Turkish troops invaded and occupied 37% of its territory. Anastasiades and Akinci have been engaged in UN-led talks since May 2015, with a view to reunite the island under a federal roof.