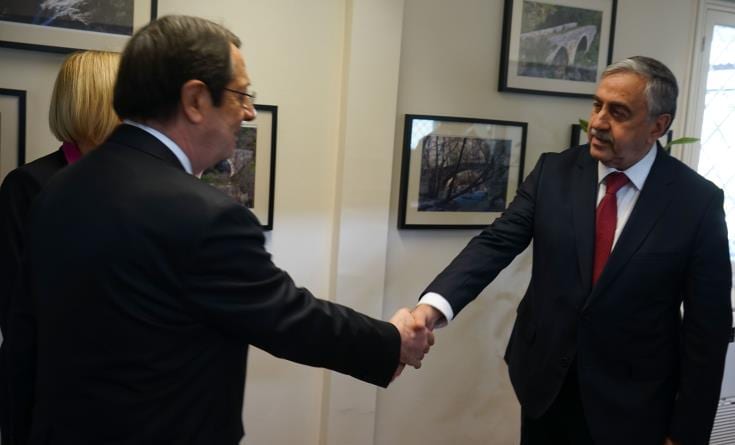 President of the Republic Nicos Anastasiades said on Thursday that there cannot be a solution of the Cyprus problem with claims similar to those made by Turkish Deputy Prime Minister Tugrul Turkes.

The President described Turkes` remarks with regard to a political settlement in Cyprus as “unfounded and groundless”. Turkes has claimed the same rights for Turkish nationals as those enjoyed by EU citizens in a reunited Cyprus and said that “even if no Turkish Cypriots lived in Cyprus, as far as Turkey is concerned the Cyprus issue will still exist and Cyprus is of vital importance (to Ankara) because of policies in the Eastern Mediterranean.”

After his meeting with Turkish Cypriot leader Mustafa Akintzi on Thursday, the President stated that they decided to hold a new meeting on the 1st of February to determine the procedure and methodology to be followed at the ongoin UN-led negotiations.

He said that at Thursday`s meeting, himself and the Turkish Cypriot leader were informed by the negotiators about the discussions held at deputies` level on 18-19 of January in Mont Pelerin, Switzerland.

Secondly, he said, “it was decided to continue the dialogue in Cyprus, on all subjects, with the determination to work in order to narrow existing differences or if possible conclude on the majority of the subjects”.

Asked whether there will be a new Conference in Geneva, Anastasiades said this is going to be among the issues that will be discussed.

“The Geneva Conference was neither the beginning nor the end and consequently the dialogue must continue on the important issue of guarantees,” he added.

Asked to comment on the statements by Tugrul Turkes, Turkish Deputy Prime Minister, the President noted that “as long as Turkish officials make similar unacceptable statements, the only thing they achieve is to create a negative climate”.

The President added that “it is unthinkable with similar claims to have a solution of the Cyprus problem”, describing Turkes` statements as “unfounded and groundless”.

Replying to a question, Anastasiades said that representations will be made to the Special Adviser of the UN Secretary General about his statements over a five-party conference in Geneva.

Cyprus has been divided since 1974, when Turkish troops invaded and occupied 37% of its territory. A new UN-led effort to reunite the island has been under way since May 2015.