PAFOS2017: The journey of the European Capital of Culture begins 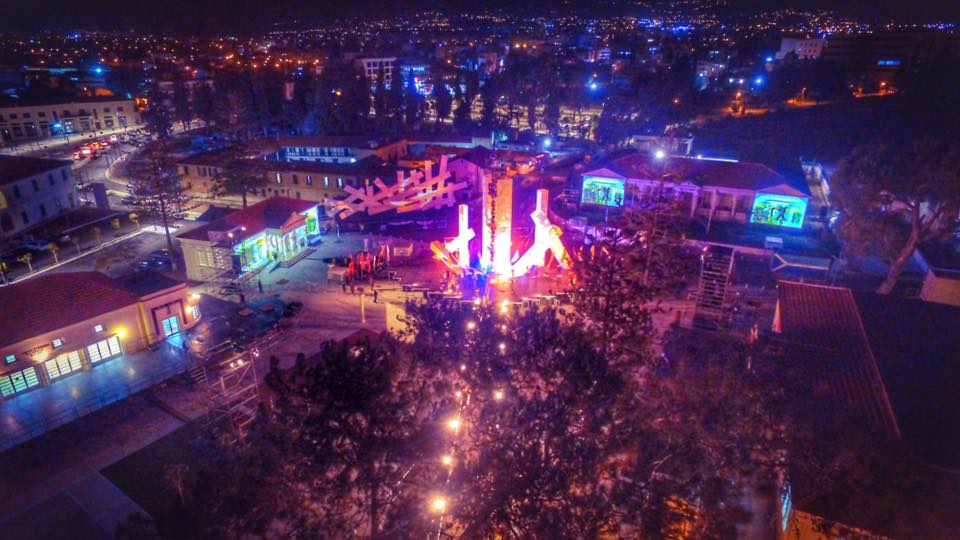 The opening of the European Capital of Culture Pafos2017 is inspired by the city’s plethora of myths and mythological figures and showcases its history, cultural heritage, its diversity and its multicultural aspects over time, all the way to the modern culture of Pafos, Cyprus and Europe. At the heart of these events lies the myth of the birth of Pafos through the union of Pygmalion and Galatea, a creator and his creation. Through the story of the artist and his artwork coming to life, the opening will reinforce the idea of Pafos, the city, as a work of art in itself.

The myth of Pygmalion and Galatea and the many mythological and historical events that followed, point out the central role Pafos has played as the island’s Capital of Culture from the beginning of history.  Pafos2017 starts the narrative of the European Capital of Culture at the very heart of the city where its most recent history was written, in front of the schools and the neoclassical buildings of the city centre.

The opening events link the past and the future of the city. The narrative of Pafos’ grand journey towards the world and of the world towards Pafos will unfold throughout the weekend with actions, spectacles, exhibitions, music and projections.

The space where the myths and stories, events and activities take place is the Open Air Factory. Far beyond being just a perfect concept for a city with a tradition of open air cultural events dating back thousands of years, the Open Air Factory stands for much more: the openness of Pafos at the crossroads between cultures and continents, the opening-up of the hidden potential of the city and its citizens, the re-discovery of Pafos as an artistic “factory”, a place of creative production and artistic creation

In the Open Air Factory musicians, actors, dancers, volunteers, young people and children from Pafos and all the communities of Cyprus as well as Europe, the Middle East and Aarhus, come together in a celebration of Europe and its cultural diversity that marks the opening of the European Capital of Culture – Pafos2017 programme.

A walk around the city and the main venues of the European Capital of Culture – Pafos2017 programme. In different parts of the city, information points and volunteers will provide information to the public about the Pafos2017 programme. Events, music and exhibitions will set the tone for a different year filled with art, cultural actions, festivals, artists and visitors from all around the world.

Five recitals from five soloists, both musicians and singers, performing works from the classical and the modern repertoire in everyday get-together places.

Aarhus and Pafos, the two European Capitals of Culture for 2017, will be connected throughout the year by a series of common projects and actions, starting with their Opening Events. The work of the internationally renowned Danish composer, Lars Møller, was composed specifically for the opening event of the European Capital of Culture – Aarhus2017. The composer who is inspired by today’s World Travellers, the Immigrants, comes to present his work also in Pafos with the Aarhus Jazz Orchestra, the Concert Clemens Choir and the Music Lyceum of Pafos Choir.

The Aarhus Jazz Orchestra will be conducted by Lars Møller.

The Concert Clemens Choir will be conducted by Carsten Seyer Hansen.

With the participation of the Choir of the Music Lyceum of Pafos.

The exhibition will remain open until the 28th of February 2017

Kostis Palamas Square, Kennedy Square and A’ Lyceum of Pafos

The opening ceremony of the European Capital of Culture – Pafos2017 showcases the history, the multiculturalism and the modern culture of Pafos as an integral part of the wider European culture. The ceremony was designed and produced by a Creative Team of Cypriot artists and intellectuals, working with Walk the Plank.

Inspired by the myth of Pafos, it has at its heart the founding myth of Pygmalion, the Artist and his creation, Galatea.

The celebratory performance seeks to portray the core concepts of the Open Air Factory, such as creativity, originality, artistic excellence, and also multiculturalism, diversity, as well as the hope for a unified country.

Young people, children and volunteers from all over Cyprus will join professional cast from all over the island. Greek Cypriot and Turkish Cypriot musicians and singers will sing in unison with a Danish choir and the Jazz Orchestra from Aarhus, our partner Capital of Culture. As Pygmalion invokes the spirit of Aphrodite to breathe life into the statue he has carved, light and fire will illuminate the sky above our newly restored city centre.

Original compositions, as well as adaptations of music, choreographies and projections brought to life by actors, dancers and hundreds of children who illuminate the moment of Pafos’ birth and mark the opening of the European Capital of Culture – Pafos2017.

The Choir of the Music Lyceum of Pafos– Teacher: Isavella Christofidou

Participants live on stage or recorded on the soundtracks:

Children from the Theatre Institute of Pafos.

Children from Primary Schools of Pafos

20:30 Music Bridges in Time and Space

The opening ceremony comes to an end and the lights turn to a different musical encounter, where a festival of songs from various places and times unfolds, celebrating the joy of life, the power of creativity and the mystery of the world. Accompanied by a group of excellent musicians, Alkistis Protopsalti and Doros Dimosthenous sing and celebrate the opening of the European Capital of Culture for 2017 in Pafos.

A tour around the city and the main venues of the European Capital of Culture – Pafos2017 programme. In different parts of the city, information points and volunteers will provide information to the public about the Pafos2017 programme. Events, music and exhibitions will set the tone for a different year filled with art, cultural actions, festivals, artists and visitors from all around the world.

The Choir of the Music School of Pafos, having travelled to the “other” European Capital of Culture for 2017, the city of Aarhus in Denmark, during its opening events on January 21st, connects the two European Capitals of Culture both symbolically and literally (through music).

The video installation “Far Off Land” focuses on the distant land of childhood and the memories of the body, as well as the “distant land” of the shared hopes and dreams for the future. The project is inspired by the work of the renowned Cypriot poet Taner Baybars (Plucked in a Far Off Land), as well as the research the team has conducted on childhood before and after 1974. Three generations of Cypriots (from both sides of the Buffer Zone) get together to share their experiences as part of the installation. The installation is devoted to the two communities, as well as to every people living in a divided society. The project invites visitors to experience the installation as a voyage through three spaces and three parts respectively and write down their own experience with a wish for the future.

The project, implemented by the team Echo Arts, was designed and created by Ariana Economou, Gurgenc Korkmazel, Dorinda Hulton and Peter Hulton. The music was composed by Larkos Larkou.

The exhibition will remain open until February 15th 2017

The European Capital of Culture honours the great visual artists from the so-called Second Generation of Cyprus, who played a decisive role in the development of the arts on the island, shaping an entire visual arts (mainly painting) school of thought in Pafos and the rest of Cyprus. The painters Stas Paraschos, Costas Economou, Andreas Charalambides, Giorgos Kotsonis, Christos Christou and Christos Foukaras, as well as the sculptors Andis Hadjiadamos and Kypros Perdios have affected and enriched visual creation in our country, incorporating influences from around the world into their works, in a significantly creative manner. Esperia Iliadou-Suppiej is the curator of this exhibition.

The exhibition will remain open until February 28th 2017

15:30* Michael Cacoyannis – Gazing at the Future

A photography exhibition dedicated to the internationally renowned Greek film artist. Material from the versatile artist’s archives, portraits, photos, scenes from the making of films and, also, shots from his films in new prints and under the supervision of the Italian artist Antonio Manta, Lecturer at the University of Urbino ISIA, honoured with the International Photography Award.

With the collaboration of the Michael Cacoyannis Foundation in Athens.

The Cyprus Theatre Organisation presents Wajdi Mouawad’s play for the first time in Cyprus, in a performance inspired by the Open Air Factory, since the plot takes place in a parking lot utilising three dimensions: live performance, radio drama and “drive in theatre”. The outdoor set will be defined by the audience, who will watch the performance from their cars, with the soundscape and the actors’ voices being transmitted through a specific radio frequency, while watching the action unfold before their eyes.

A will becomes the reason for two young people to travel to the Middle East in the pursuit of their roots after their mother’s death. Through their wandering, they will unveil secret aspects of their mother’s life and the consequences she suffered from the civil war. Incendies (Fires) is a play that involves both Europe and the Middle East, reflecting in the best way possible the true significance of the motto of the European Capital of Culture – Pafos2017 Linking Continents – Bridging Cultures.

20:30 In the Land of Aphrodite and Pygmalion

As the European Capital of Culture for 2017, Pafos celebrates the opening of the institution with a concert performed by the Cyprus Symphony Orchestra, focusing on the myths and legends of the area, as well as the city’s own goddess, Aphrodite, also known as Venus. It is a music voyage passing by Aphrodite, Adonis, Arodafnousa and reaching the myth of Pygmalion and Galatea that inspired many composers and artists. Divinity, beauty and love are at the heart of the Opening Concert of the European Capital of Culture – Pafos2017.

Special thanks to the following institutions for their services and support:

* Official exhibition tour time by the curators. The exhibitions will be open during the two days from 10:00 – 19:00