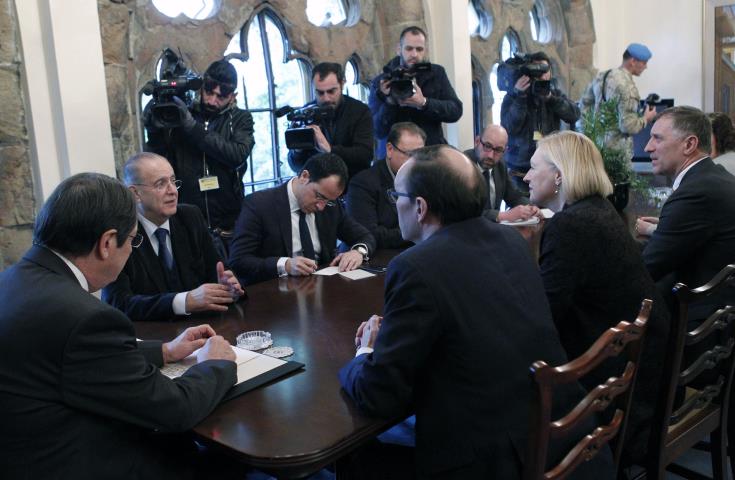 UN Secretary General`s Special Advisor for Cyprus, Espen Barth Eide, has said that Wednesday`s meeting between the leaders of the two communities in Cyprus will be crucial, adding that the leaders will have to agree on the steps ahead.

Eide, who was received on Tuesday by President of the Republic of Cyprus Nicos Anastasiades, said that `tomorrow it will be a crucial meeting between the leaders because we need to see how we use these coming days optimally in order to prepare for a return to the international format`.

Describing his meeting with President Anastasiades as very good, he said they discussed tomorrow`s meeting of the leaders.

Referring to the Conference on Cyprus, that took place on the 12 of January, he said that there was an agreement at the opening session of the conference that in parallel all outstanding issues will be discussed in Cyprus. `How much time it will take and which order that is something that the leaders will come to some kind of agreement tomorrow` he said, adding that now every chapter is open.

Asked if he sees problems to move forward to a second Conference on Cyprus, he said that
the agreement is that we will reconvene when time is ripe and when that is agreed between the leaders and the other participants of the conference.

`I would not say that it is a problem` he said, noting that `we need a better understanding of which things need to be done here in order to be able to successfully reconvene, because you can always have a meeting but the purpose of the next meeting should be that we conclude something`.

`I do not think that we are in a substantive disagreement at all. We were all there and we were referring to the same meeting` he went on to say.

Asked if he believes that the Conference on Cyprus was not convened at the proper time, Eide said that he does not believe so, adding that `it was important to get to the stage that we could open the international conference`.

He recalled that the conference is open ended, saying that `sometimes I got the impression that some people thought that it was possible to solve these most difficult issues of the Cyprus problem in two days. Of course not`.

Eide pointed out that the conference decided to set down a high level technical working group, which met the week after, and which, as he said, `was fully successful in the sense that it did exactly what it was asked to do, which was to agree on what the questions are and to agree on the list of instruments by which to deal with these questions`.

`Of course this is interdependent with a number of other issues and right now we are here to continue the talks in Cyprus. The conference is on, in the sense that it will be on until it finally concludes. But the next session is what we have to decide. I don`t have the timing and we will convene when time is ripe` he added.

Eide pointed out that the Conference on Cyprus had to be convened `because without it we could not open the sixth chapter` on security and guarantees.
`The other players that are particularly relevant here have other issues too. And for them Cyprus is one of many questions. For the leaders and myself Cyprus is the question, but for Turkey and Greece for instance there are many other issues on the agenda and they will influence the way they think about the Cyprus question as well. So we need to be aware of this bigger picture while we need to focus on the need to solve the Cyprus problem` he said.

Eide pointed out that `while the guarantor powers see a bigger game they also see the settlement of the Cyprus problem as positive for their bigger questions. So I know there is a convergence that solving the problem will be a good thing`.

Asked if we are in the moment of give and take, he said “probably we are not far away from something like that. Yes. Although we would of course refer to it as a win win outcome”.

He recalled that recently, the 15 members of the UN Security Council united made a `strong statement` for Cyprus, supporting the leaders, the process and the UN, saying that there are not many united statements these days and we should cherish it.

Cyprus has been divided since 1974, when Turkish troops invaded and occupied 37% of its territory. Cyprus President Nicos Anastasiades and Turkish Cypriot leader Mustafa Akinci have been engaged in UN-backed talks since May 2015, with a view to reunite the island under a federal roof.

The Conference on Cyprus convened in Geneva, on January 12, under the auspices of the UN Secretary-General Antonio Guterres, with the participation of President Anastasiades and Turkish Cypriot leader Mustafa Akinci, the Foreign Ministers of Greece, Turkey and the United Kingdom as guarantor powers, and in the presence of the European Union as an observer, to address the issue of security and guarantees, a crucial chapter in discussions for a Cyprus settlement.

Anastasiades and Akinci met on January 26 and decided to hold a new meeting on February 1, to determine the procedure and methodology to be followed at the ongoing UN-backed negotiations.